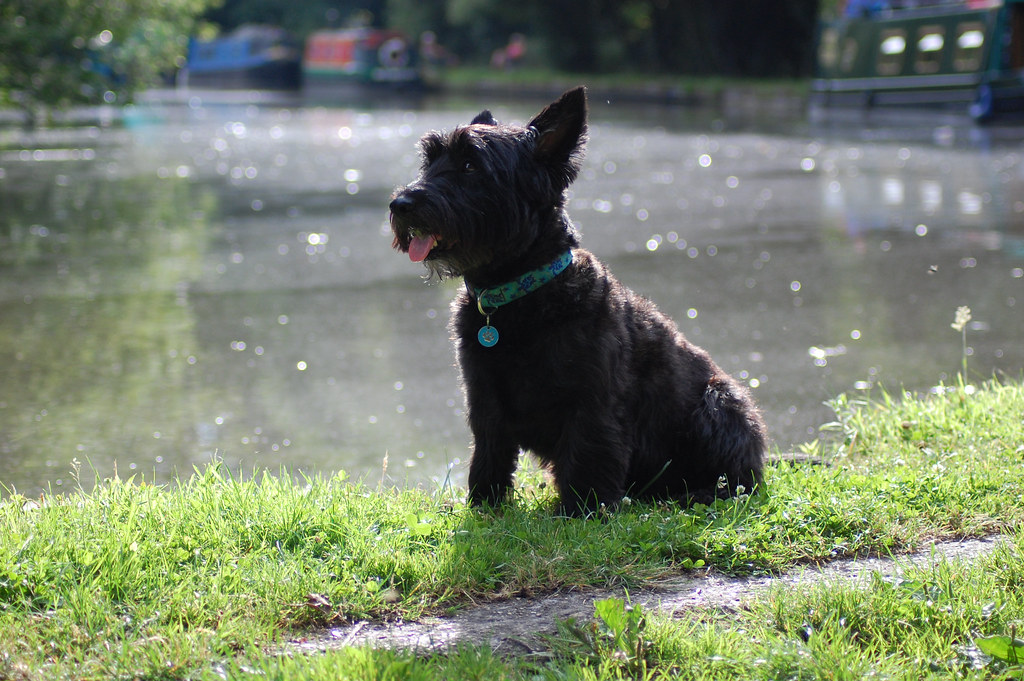 If you’re on the lookout for a hypoallergenic pet for your family, then the Scoland Terrier, a hybrid of the Scottish Terrier and the West Highland Terrier (Westie) is a perfect choice. This designer breed is highly intelligent, energetic, playful, loyal and extremely loving, which makes the Scoland Terrier extremely popular with pet owners.

Scoland Terrier: At a Glance

The origins of the Scottish Terrier can be traced way back to the 1500s, where they were written about in a book by Don Leslie. The mention of a Scottish Terrier-like dog has also been made in 55 BC by Pliny the Elder in his writings.

The Scottish Terrier was originally bred as a hunter and ratter that was used to hunt foxes and other vermin. In 1885, the breed was recognized by the AKC and is ranked as the 58th most popular breed of dogs.

The origin of the other parent of the Scoland Terrier, the Westie or West Highland White Terrier can also be traced way back to the 1500s to the Scottish Highlands, where they were bred as hunting dogs to hunt small game on farms, fields, mills, villages, etc. to hunt and kill vermin.

Originally, Westies had red coats but were often killed accidentally after they were mistaken for foxes and so they began to be bred with cream-colored coats, which became white as they are today.

The Westie breed was recognized in 1908 by the AKC and ranked 41 in popularity. The Scoland Terrier hybrid breed is recognized by the Designer Breed Registry, American Canine Hybrid Club, the International Designer Canine Registry, Designer Dogs Kennel Club and Dog Registry of America.

Related: Westie Mixes You Will Love

Usually, Scoland Terriers have black-colored coats with white markings, although some dogs can also be fawn-colored. The Scoland Terrier has a medium to long double coat, around 2 inches long, with a harsh, wiry topcoat and a soft and dense undercoat.

The breed is characterized by its cute and lively face with a petite black nose, bright, dark and round eyes, small erect, triangular ears, a noticeable scissor bite and a medium length, fluffy tail.

They are quite adaptable and can adjust to any changes in the family situation, as well as the environment. Proper socialization can help your Scoland Terrier to adapt to new people and share their space with others. This will also enable your pooch to be friendly and get along with kids and other pets in your home.

Since the Scoland Terrier is a mix of two hunting breeds, they have a deeply ingrained instinct to dig. Also, training your Scoland Terrier can be difficult because they tend to be quite independent and stubborn, tendencies that have been inherited from both parents. So, you need to be extremely patient while training your pooch and teach him simple commands and build on them gradually.

Scoland Terriers don’t bark a lot; however, if they sense that something is wrong or if approached by strangers, they will alert you by barking. The breed is highly energetic and active, thanks to the high levels of energy of the parent breeds.

To manage their natural hunting instincts, you must ensure that your Scoland Terrier gets plenty of exercise to keep him physically and mentally stimulated. The breed is also naturally curious and dislikes being left alone. If left alone for long periods, they can get bored and indulge in destructive behaviors such as chewing, digging, etc.

Before deciding to bring home any dog breed, it is always a good idea to understand the various health concerns affecting them. This will enable you to be prepared for any specific health issue and provide your pet with the best quality of life. Like other breeds, Scoland Terriers are also prone to certain diseases, which include:

Scoland Terriers are easy to maintain, hypoallergenic dogs that shed moderately. They are generally clean dogs and don’t smell or drool. Depending on how active your pooch is, you will need to brush their medium-length coat every week and remove all the loose, matted and tangled hair and any dirt or debris stuck in the hair, keeping the coat healthy.

Also, the skin of the Scoland Terrier tends to produce excessive sebum so brushing the coat well helps to spread the oil through your pet’s coat. You must check your pet’s toenails and trim them every week.

Related: 21 of the Most Adorable Scottish Terrier Mixes

In general, Scoland Terriers are quite energetic and active and require plenty of playtime, running around and daily walks to keep them stimulated physically and mentally. They love to play fetch, agility and obedience training, Frisbee and other games. Around an hour of activity is good to keep them active and fit.

And, after a long, tiring and active day, your Scoland terrier is quite happy to cuddle up on your lap or next to you while you relax in your bed or in front of the television. Being a small-sized dog, Scoland Terriers are well suited for an apartment, condo or small home, as long as you can handle their energy levels.

Scoland Terriers do quite well in a home with a fenced yard or garden and can adjust to any type of weather as long as they have adequate protection for extreme weather conditions.

The dogs are avid diggers and because of their high hunting drive, it’s a good idea to have your Scoland Terrier on a leash or fenced yard when he is outside your home.

When it comes to bringing home a pooch, nothing can beat the Scoland Terrier. This playful and active pooch is sure to keep you on your toes all day long and fill your day with energy. This bright and cuddly package of love is sure to capture your heart in an instant and remain that way forever.