10 of the Most Popular Alaskan Malamute Mix Breeds

If you have a fondness for Alaskan Malamutes, then you’ve probably wanted to look at the several Alaskan Malamute mix breeds. Some, like Huskamute and Wolamute, are pretty popular and are loved by all.

Both of the breeds were bred for long hauls across the snow and for companionship, which is why they’re similar in temperament too.

The Huskamute has a wolf-like appearance with beautiful eyes that range from sharp blue, amber, or brown colors. They are large and can weigh anywhere between 60 pounds to 100 pounds as both Huskies and Malamutes are huge, too.

They have a soft, fluffy double coat that sheds a lot, so, unfortunately, they’re not a hypoallergenic breed.

Both its parents- the Huskies and Alaskan Malamutes are known for their high energy drives. Huskamutes, being no different, are also very playful and require consistent and regular 90-minute exercise, without which they’re prone to negative behaviors.

They’re also very social and prefer to be in a pack rather than alone, so they tend to get along with other breeds well.

If you’re looking for a large, loyal, strong, and fierce buddy, then the Alaskan Shepherds are one of the best to consider. They’re a crossbreed between Alaskan Malamute and a German Shepherd, because of which they tend to be quite large.

Since both of its parents are fairly huge, the Alaskan Shepherd is also often intimidating in its size. They tend to make fabulous guard dogs. Most commonly, an Alaskan Shepherd will have brown eyes, but there are instances where they can have hazel or blue eyes as well, depending on the parent.

They can have an average build size of around 21-25 inches and possess a muscular build. They have adorable curled tails that are long and plumed.

Just like their parents, Alaskan Shepherds can often be quite stubborn and difficult to train. But the joy of finally getting through them is incomparable.

They are quite independent but make excellent family watchdogs as they can be loyal and vigilant to a fault. They’re also quite friendly and affectionate.

Goldenmutes tend to have a fluffy and soft coat of black, brown, and light brown colors, often a pretty mix of them. Although their coats are mostly similar to their Alaskan Malamute counterparts, their features tend to be soft and fluffy, owing to their Golden Retriever half.

They can weigh anywhere between 60 to 80 pounds on average and fall on the smaller build size than other mixes.

In Goldenmutes, their golden retriever half seems to dominate their temperament. They can be passive and can laze around most of the day if you let them. As they are super friendly and affectionate, they are ideal as family dogs and can be kept around children. 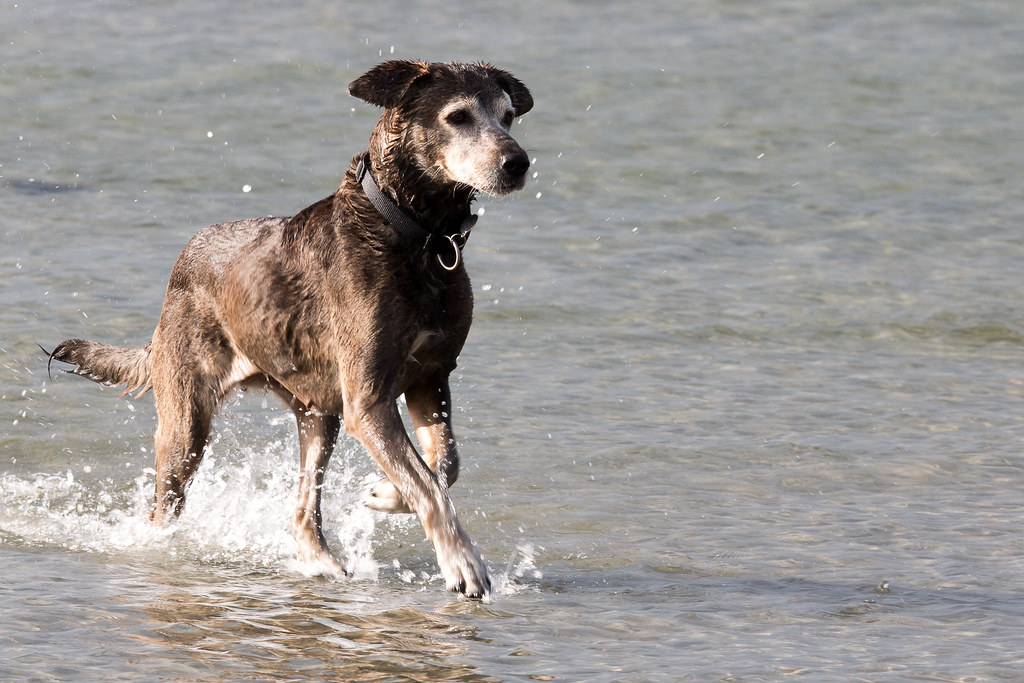 Similar in build and size to Goldenmutes, Alaskan Maladors is a breed made from the crossbreeding of Alaskan Malamute and a Labrador Retriever.

However, the similarities end in the build size as Alaska Maladors require quite a lot of training and exercise and are an energetic breed.

Alaskan Malador is adorable and tends to be on the smaller side, with adults having an average weight of 65-85 pounds. They tend to closely resemble their Labrador Retriever side but often possess markings that betray their Alaskan Malamute side.

However, since this breed mix is often not stabilized, they can take the appearance of either of their halves. They also tend to have a soft double coat, although their coats are denser and shorter than their Alaskan Malamute parent.

They’re spunky and full of restless energy that would love nothing more than outdoor hikes, exercise training sessions, and playtime. They’re very affectionate and can easily bond with their owners but tend to suffer from separation anxiety on occasions.

A cross between the Great Pyrenees and the Alaskan Malamute, the Malanees are a special breed. They possess the robust strength of their parents and are often used as working dogs, making them a handful to manage.

They’re beautiful with thick fur coats that require little maintenance to be kept clean, although they shed excessively.

Since both the Alaskan Malamute and the Great Pyrenees possess incredible and large builds, the Malanees, too, are huge. They can weigh up to 110 pounds and tend to have both lighter and darker shades of coats- depending upon the parent it takes after.

As the Alaskan Malamute gene can be quite dominant, the Malanees can be influenced to have tall and triangular-shaped ears, unlike Pyrenees’ folded ones.

Since they are working dogs, they need a lot of exercise and workouts. They tend to be independent and quite strong willed and adept at trying to escape.

They can often be hard to manage and housebreak and are not for first-time owners. They tend to require strong leadership but are incredibly loyal.

They make great companion pets but are often best kept away from other small, weak animals due to their high prey drive.

Since the crossbreeding is between a smaller and large dog, the resulting mix of Border Malamute Terriers is often small to medium-sized.

They often weigh around 15 to 20 pounds and have heights ranging from 15 to 17 inches. They don’t have an overly soft or fluffy coat but instead have dense, wiry coats and can have colors ranging from grey, fawn, brindle, and white.

Owing to its parental breeds, Border Malamute Terriers tend to be quite companionable, friendly, and loyal. They make ideal family dogs and are great with kids. They tend to be very carefree around strangers due to their low guarding instincts and are highly sociable.

Although the exact breed of Foxhound for a Mally Foxhound is unknown, they’re typically believed to connect to the English Foxhound.

This designer breed is also similar to the Border Malamute Terrier in that it, too, is a working dog but is mostly used for companionship.

The Mally Foxhounds can have smooth coats, which are easier to maintain than fluffy double coats and are commonly medium to large. Since both its parents are working dogs, the Mally Foxhound tends to have athletics and a muscular build.

They can be as tall as 27 inches and can weigh up to 95 pounds. Moderately sized Mally Foxhounds tend to be between 50 to 70 pounds.

They are good at adjusting and adapting and can become great companions for hunting trips as they’re good at tracking. They also have a high escape drive, so they tend to run away a lot, which requires them to be kept on a leash often.

They can be aggressive but also very affectionate, friendly, and playful as well.

One of the healthiest and low maintenance designer breeds, the Alaskan Pit Bull can make a suitable addition to your family. They can live up to 15 years and are expressive in their affection.

These furry friends are a hybrid breed made from crossing the Alaskan Malamute and the Pit Bull Terrier.

They have the ferocious look of the Pit Bulls and have a medium to large-sized build that can be quite impressive. In Alaskan Pit Bulls, the female dogs tend to be a little on the slimmer and paler side than the males. This is because they are sexually dimorphic.

They take upon the strong and square shape of the muzzle from their Pit Bull half and can either have erect or pendant-shaped ears.

Although they may look big and badass, they can be very needy of your TLC and love to cuddle. They are people pleasers and would love nothing more to have your approval.

However, they are also stone pack animals, which makes them a highly social breed.

One of the oldest designers breeds still around. The Wolamute is believed to go back to a thousand years. They are also known as Malawolf and can look fierce, intimidating but also possess a beautiful and attractive disposition.

However, they aren’t made to be kept as house pets unless they go through intensive and firm training, as they can often be difficult to manage.

Since it is half-bred from a wolf, the Wolamutes have a very wolf-like and predatory appearance. They can have pointy ears and a mix of colors for their coats. The colors can range from combinations of dark and light shades with prominent markings visible on its body.

They are large-sized and can weigh between 115-175 pounds.

They often have protective, independent, territorial, and intelligent temperaments. They can also be very affectionate and loyal once properly domesticated.

However, training them requires a firm hand and can get aggressive without it.

A hybrid breed that is a result of crossbreeding between Alaskan Malamutes and Akita, the Akitamutes are charming as a family pet.

Although they can be very loyal, they often require a lot of obedience training and an owner that can take on the role of being their alpha. They require proper socialization, without which they can grow quite aggressive.

The Akitamute is a large-sized breed and can grow as tall as 25 inches. They weigh around 70-130 pounds and can live for around 10-12 years.

They tend to shed a lot as they have dense fur coats, but it is relatively easy to groom them as they don’t require high maintenance.

Being pack animals, the Akitamute often don’t do well on their own. They can be a little difficult to manage due to their stubborn nature and high prey drive, because of which it would be advisable to keep them away from smaller animals.

Other than that, they’re quite affectionate and loyal and can be a great addition to your family.

Alaskan Malamute mix breeds are very popular due to their attractive build and look. With different sets of mixes, each breed is quite special on their own and make amazing companions and additions to your homes.

While it’s okay to spoil them with love and affection, it is important to ensure that your buddies always receive optimal training as well.